Okay, I have to comment on the Republican debate tonight, I felt that Fox Business did a great job of bringing up substantive issues that the American people want to know about....well, I wanted to know about.  I'm not interested in keeping a score, but, I will say that Kasich and Bush did better than their last debates, buuuuut, don't think they moved the needle, but hey, it isn't over.  I thought Carson was funny and had some really good points on foreign policy, and Christy did a good job on those subjects as well.  Now, the three amigos, Trump, Cruz and Rubio, wow, they were on fire.  When I say they were on fire that does not necessarily mean I agreed with all they said, just that there were some good points scored against and for each of them.

Having said all of this, I would crawl, in shorts, on broken glass, to vote for any of them over any of the democrats.  I'm so tired of the, "hate this class of people over another", "punish the producers of this country", "the cops are all bad", "give our enemies billions of dollars", and "let's take more rights away so they have no strength" and, "Gee, our country sucks".  But hey, that's me. Socialism is simply and entry level drug for Communism, sorry, but that is what I believe....which leads me to a concern I have about this coming election.

Stand for Something, Even if You're Standing Alone

I've often heard the phrase; "stand for something even if it means you're standing alone", and when I hear it, I'm always moved to a self evaluation of sorts.  To my knowledge there is no one person to give credit to this phrase, and I've heard it delivered in slightly different ways but, to me it represents a person who has core convictions and high moral character.  Core convictions do not always mean correct convictions.  To be sure, there are many today who are willing to perform horribly outrageous acts in the name of their core convictions.  They are motivated by hate and disdain for anyone who is at odds with their beliefs.  These too, are willing to stand alone...and kill.  But this is not what I am referring to.

To me, standing for something means that a person is willing to break with today's norms and altered values.  It really wasn't very long ago that many of the things we considered morally valuable are now repulsed by the popular culture, and the popular culture includes far more than enthusiastic youth movements, in my humble opinion, it is throughout all classes and age groups.  The phrase, "stand for something even if it means you're standing alone,  requires one to examine his/her core values, does it not?  I ask myself, how important are my core beliefs and values to me?  I see many of them being mocked, belittled, destroyed and altered by popular demand.  Contrary to popular values, I do see people who brave the ridicule of pop culture and it seems to often come from our youth.  Youth? Yes, youth!  Don't get me wrong, there are still a lot of kids that willingly walk with the larger, more popular crowds but, if you look, you'll see kids that serve their communities, refuse to weaken themselves by through drug and alcohol abuse, choosing to abstain from sexual activity until they are married, and strive to speak with little to no foul language.  Contrary to the elite's who preach to the contrary, our youth do believe they can control appetites of the flesh and be the masters of their fate. They do believe they can maintain self control and be the masters of their destiny.

Okay, time for some personal observations and comparisons from my own historical perspectives.  In my youth, Christmas was, Christmas.  It was common to say, Merry Christmas with practically zero offense to others.  Oh sure, there where a very few who were anti-Christmas, but it was a very few.  Today, they have a prominent voice.  As a young man, we were urged to be morally clean, granted this has been an ongoing human struggle since the beginning of recorded history, but, it was commonly desired even though the failure was more common than not.  We were encouraged to abstain.  Today, our youth are encouraged to engage.  We can debate the reasons why, but, my only point is, that there is a shift in thought regardless of the reasons why.  Freedom was a common proclamation by the left, the "60's radicals" demanded freedom from the government in order to live lives deemed immoral by society,  and the conservatives were engaging the government to restrain them; today the same "60's radicals" are demanding the government control morality and conservatives are demanding the government get out of our lives.  Again, the reasons can be debated, but there is now a definite push toward socialistic policies and procedures on the left side of the political aisle and a demand for liberation from government over reach on the right side.

The previous paragraph is a simplified generalization of my point, that life and the world has drastically changed.  In many ways it has stayed the same too, yes, but it is clearly a different time.  As someone who believes in the worth of high moral character and Christian values, I am now finding myself feeling compelled to stand.  No, I'm not alone, nor am I a Sophie or Hans Scholl, I'm just someone who values religious freedom and views this constitutional freedom as the most valuable of the amendments.  We are guaranteed the freedom OF religion, not freedom FROM religion.  I believe many are actively trying to take away the right to free worship.  I am almost surprised to hear that come from my mouth, "was that out loud", yes it was.  Never have I been a conspiracy theorist per se, but actions are louder than words and I do not trust this administration to preserve my freedoms.  For example; Obama was against gay marriage and then came out for it as if it was always a part of his lexicon.  By executive order we now have it, okay, so be it; but now we see people being sued for not baking cakes or hosting receptions of same sex weddings, what's next?  Well, the rumor is, that churches that are unwilling to perform such weddings could be in trouble.  I personally would have baked the cake or hosted reception, but I'm also a capitalists and I do not believe doing so threatens my personal values, however,  I support those who do not want to participate because the feel it does threaten their beliefs.  Isn't it their choice?  Apparently not, so, they stood for their values, and they were sued by activists and governments, even when the couple had no desire to sue their long time baker and friend.  Don't tell me there is no agenda.

So, I respect those who stand.  I've watched my kids and their friends stand, my good buddy who lost his life, Nate Ford was a great example who stood firm on his values, he was killed a few months back in a car accident.  His death resulted in a galvanization of our little community and a sense of brotherhood and friendship because he had that kind of effect on all our lives.  He was just a good young man who was always willing to stand for what is right, no matter the cost, and people noticed.  There is value in standing for something, even when you feel alone, when the world is screaming at your face, demanding you change....don't listen and don't change, be firm in your values.

And that should be "out loud".

Happy New Year everybody.  I haven't posted in a while, work has been pretty strenuous and busy as I have some dead lines to meet.  So, I am taking a few minutes to update my family room project.  Thought I'd leave politics and other opinionated blogs for another day.  So, with that disclaimer out of the way, here we are.

We started this project with two goals in mind; get rid of the built in shelving, and turn the TV area so it can be seen from the kitchen.

We have completed the drywall, paint, lighting and even have some temporary flooring and bookshelves.  The fireplace works and Lora has begun hanging family pictures and other wall art now that Christmas is over. 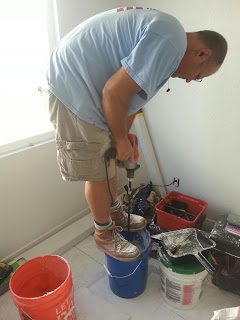 First a few catch up photos.  Drywall, not my favorite thing but has to be done.  My son snapped this shot of me mixing up some mud using an old school technique, yea that's it, old school.

Below are a few more shots leading up to where were are now, getting the drywall hung, taped, textured and applying paint. 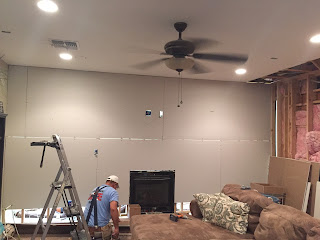 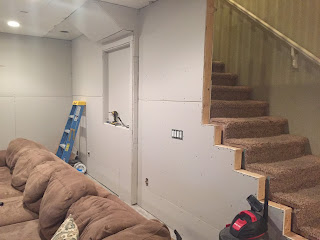 To the right is a good shot of the inset area I wrote about during the framing stages on my last blog of this project, before and after taping or texture. My only regret here is not running a small spot light above the area, but it turned out pretty good.  Better shots are below... 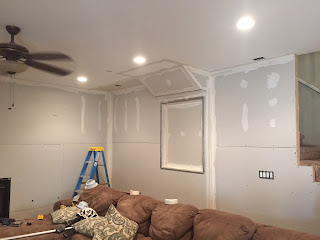