Let's Try That Again, Shall We? 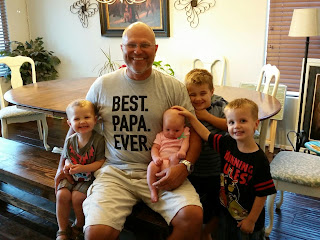 Wow, it's been quite a while since I last posted on my blog.  It's not that there hasn't been plenty to write about, I mean WOW!  This country is upside down, sideways, and inside out right now.  I have been hesitant to write because it's so emotional--which kinda flies in the face of why I even started this blog and titled it, "Was That Out Loud".  So, this morning I am coming back to it because I woke up dreaming that I was speaking to a group and trying to calm people down about this election.  I have no illusion of grandeur to think I would have any influence to change what's happening, but then again why write a blog?  Why do any of us thrust our "noble" opinions onto the world?  We are blessed or cursed depending on how you look at it, to have so much opportunity now that it's almost irresistible.  We can post on Facebook, Tweet on Twitter, or do--whatever it's called--on Instagram, the choices are many.  Passion! That is why we write, post, blog, or vomit our collective opinions all over the place.  We believe, we are right, and others are wrong.  Our opinion is what counts, right?  But, in reality it's like that color of the dress thingy that was posted.  I guess some people saw the dress one color and some saw it another--"That's called perspective, can you say perspective?"--sorry I was free associating Mr. Roger's Neighborhood for a second but I'm back now, anyway, I learned something very powerful as a business owner: my customer's perspective is my reality and how I deal with that reality is vital.  I may keep the customer and preserve the relationship and a source of future revenue, or do I deal with it from the standpoint that the customer is wrong and that pandering would be detrimental to the business, or perhaps there are other cases that may come into play; whatever, it became my new reality.  So, I guess this is why I'm writing this today.  Our perspectives have become very polarized, and I am no different.

I am someone who likes to view situations through someone else's perspective.  This helps me understand the differences we may have and at least come to an understanding that we can agree to disagree but, still be friends.  This has been an amazing election year, I've never seen anything like in my lifetime.  Regardless of your political views, I think we can all agree on that.  I won't lie, what I am seeing disturbs me greatly and I am troubled by the forces causing it.  I could name names of people who I think are fanning the flame of anger and violence, however, it would do no good.  I believe the cause is far greater than individuals embracing it.  We live in a world governed by two influences, Good and Evil.  Apologies if that seems over simplified, good and evil, but that's how I see it.  I'm sure many are saying, "well duh, Keith", and you'd be right; but hear me out for a moment.  How many of us have posted something on Facebook with the soul purpose of characterizing a group of people as something negative?  I know I have (though I freely admit some of it is HILARIOUS!) and after I have posted I will get the same responses, "yes, totally agree and furthermore..."; or, "you are and idiot and your opinion is wrong had here's why...".  My point is, I haven't changed any one's opinion at all, I have successfully fanned the flame of discontent.  I imagine many of us have heard the saying, "people don't care how much you know, until they know how much you care"; a truer statement is hard to find.  It's like trying to teach a starving person how to make bread when first, they need to eat, then learn.

So how do we feed someone who's opinion we want to change?  You just put food in front of them and let them eat. Some will be grateful for the food and the full tummy and want to know more, while others will be satisfied and perhaps grateful but, want nothing to do with how you got the food.  No, this is not a slam on the welfare class, it's my poor attempt at an analogy.  My point is, it is important to let people know we care.  Does it matter that your best buddy voted for "the enemy"?  No!  It matters that whatever made him/her your best buddy is probably still there.  So cherish that, nurture the relationship.  I've never been one to think that people with different opinions can't still be friends. However, things are getting very bad.  So, please allow a brief analysis without judgment...

I believe the election we had is and educational moment.  From the beginning, each side of the Primaries was bitter, nasty, mean, angry, and even seemed hateful at times.  Social media was on fire from both sides and each party was dealing with internal conflict.  Personally I thought this was a good thing in many ways and I did not spare my own views, I even posted why Donald J Trump was a bad candidate.  Later I found myself voting for him.  Many on the left did the same thing, supporting Bernie Sanders and then back Hillary Clinton.  Each side was demanding that their respective party listen to them.  People are not happy about a lot of different things and are demanding change--I was no different.  Finally two candidates emerged and typical of every election some were happy and some were not happy on both sides.  Cries of foul play and dirty politics from every corner.  As the election progressed it got more and more divided, or perhaps, existing divisions were manifesting themselves.  So, what do we learn from all of this?

My own perspective is that the people of this country wanted change.  What kind of change we hoped for and what kind of change we get is still to be made manifest.  We have no idea how our new president will conduct himself or govern--he's never even been a politician.  There is anxiety on both sides, if we are to be truthful about it.  I was personally happy about it because I was one who was seeking change, just as those in 2008 were seeking change were happy about President Obama.  I remember being very disappointed that day and wondered what would become of us.  I also remember that I had a moment that night before he spoke to the nation as our new president elect--I was about to just turn the TV off and go to bed and instead I listened.  I was impressed with much of what he said and unimpressed by other things.  My consensus was that I would give him a chance.  I was surprised by my actions and was quite proud of myself.  Sadly, much of what I feared he would try to do, he did.  I am one who did not want to see the country taken in the direction he took it.  I exercised my right to make change and that is about all I could do.  I endured his leadership and disagreed, yes, sometimes bitterly.  But, there was one time I shocked the family when I totally agreed with him and still do: I agreed that we should not allow our citizens to sue Saudi Arabia for 9/11.  Not because I think they are innocent, far from it, but because it opens up our own country to such actions and would endanger our service men and women and other American Expatriates, and vacationers to danger.  I was saddened by the gloating of his supporters and the attacks on people of faith as if they were the cause of all things bad.  The blanket accusations of bigotry, racism, sexism, homophobia, hicks, rednecks and so it went, were disturbing.  On my side, it was dished out in kind; welfare cheats, anti-constitutionalists, 1st and 2nd amendment deniers, open boarder freaks, and so on.  At times I felt, "Yea, and the horse you rode in on buddy...", I felt falsely accused and justified at the same time.  Why?  Because I was giving in to evil influences.  I was allowing myself to feel anger and bitterness toward my fellow countrymen.  I still struggle with this because I am a very emotional person inside and sometimes outside too, and I am a flawed human.  It is my hope we can see and recognize this and not give in to the hate.  It is my hope that, I, can see it.

I have a friend who has vastly different political opinions than I do, however, she has devoted her life to animals, she has started shelters and given them food, medical care, comfort and perhaps most important, love.  I admire her greatly for this.  Her charitable nature makes me hopeful that the world is not lost.  I see a lot of good in the world but, it is hard to find unless you're looking for it.  I do a lot of work with the youth and I want to say that this gives me much hope for the future of our world.  There are some amazing kids in our communities these days.  We have every reason to be hopeful.

Friends, in our world today it is far more difficult to see the good, the positive and the beauty.  I challenge us all to try harder.  No one needs to sacrifice their convictions to do this, we only need to sometimes bridal our passions a bit.  If you feel passionately about a cause, then teach.  If some refuse to listen, let it go.  It's okay to point out the differences and sometimes we may feel offended, however, being offended is a choice we make and one we can avoid.  We can recognize evil when we see it and the only antidote to it is love.  I challenge us to seek for the good and the positive and when we see it, share it.  POST IT OUT LOUD!